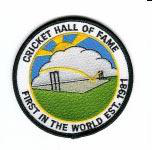 On Friday November 11, 2021 Maurice Chambers paid a visit to the Cricket Hall of Fame.

Michael Chambers, Executive Director of the Hall welcomed Chambers and remarked it was possible Maurice was a cousin.

Maurice was born in Port Antonio in the parish of Portland, Jamaica on Septembers 14, 1987 and migrated to England as a youngster.

Maurice as a young cricket player remembers playing with a sour orange for a cricket ball in Jamaica. As youngsters Maurice and Michael shared the fact that players from the rural areas in Jamaica had little chance of ever playing for Jamaica. His love for sports, cricket in particular, his work ethics and dedication quickly allowed him access to county cricket, in England. He represented Essex from 2005 to 2015.

Maurice recalls meeting the great Jamaican and West Indian pace bowler Dr. Michael Holding. When asked if he received any coaching or mentoring from the great Holding, he replied no.

Once again we see the West Indies missing out by failing to identify Maurice as a potential West Indies player. Jofra Archer, born in Barbados, April 1, 1995 migrated to England now plays Test cricket for England. Why? What Happened?

I like Maurice’s self-confidence, this attribute allows him to rank himself as good as both Holding and Jofra. What happened? His on field performances speaks for themselves.

Why did his career as a cricketer come to an end at such an early age?

Michael, the Executive Director of the Hall, encouraged Maurice to spend the winter months reconditioning himself, spiritually, mentally and physically. And to offer his services to USA cricket in 2022.

The Hall intends to reach out to Maurice and offer guidance in how to over come the traumatic experiences he was exposed to in England. Michael Chambers explained there was no such thin as RACISM, Chambers prefer to equate RACISM to OPPRESSION. Some of Maurice’s experiences, while plying in England, has left him traumatized.

Imagine having a bucket of cool aid dumped on your head inside the dressing room by another player who just was told Maurice was selected to play instead of him while the other players looked on and did nothing.

Maurice was presented with the book “The Winning Strokes” written by Michael Chambers.

The book describes Mindfulness, Emotional Intelligence, Visualization Training and Post Traumatic Stress Disorder counseling. Willow Cricket has put out a series of videos they refer to as “The Mind Games”

Maurice has been nominated to receive the Cricket Hall of Fame’s Presidential Award at the next Induction Ceremony scheduled for October 1, 2022.

The Cricketer a news paper in England is reporting that “Essex to investigate “historical racism” allegations by ex-player Maurice Chambers.