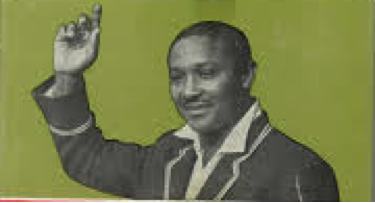 James’ wrote an extraordinary paragraph in one of his articles which read, “If however, there has to be a fight to cure our society of the dangerous abscess which has now burst, then fight there will be. Foremost, in the desire for a peaceful solution, The Nation, likewise, if nothing else suffices, will lead the attack; it will be strategic, comprehensive and final”.

CLR was simply presenting an irrefutable argument backed by the Caribbean people.

The ‘WICBC’ finally listened and Frank Mortimer Maglinne Worrell aged 36, was appointed captain. His first series was a tour against the World Champion Australians in 1960-61.

The West Indies lost the 5 Test series 2-1, but Worrell emerged with a reputation as a great captain. With his quiet powers of persuasion and man management, he molded the players into a unified group with an emphasis that the parts were not greater than the whole.

The series, which featured the first ever tied Test, was hailed as the most entertaining, captivating and competitive in the history of cricket all because of Worrell’s bold and shrewd captaincy. He was adjudged by his rival, the Australian captain, Richie Benaud, as the best captain in world cricket.

By virtue of Worrell’s leadership in this series, and victories in the two series against India (5-0) in 1962 and England (3-1) in 1963, he is still recognized by many expert observers in the cricketing world as the best West Indian captain ever.

‘For He’s a Jolly Good Fellow’

In an unprecedented show of love, 500,000 Australians lined the streets to bid the West Indian team farewell. They sang songs to honor Frank Worrell. They literally worshipped Worrell, a man of unparalleled style and grace on and off the cricket field.

Finally, in relation to the captaincy of the West Indies cricket team, the shackles of racism were removed, albeit forcibly, with thanks to the indefatigable efforts of CLR James, who inspired the cause and accelerated the process with his revolutionary and persuasive writings.

James, the author of ‘Beyond a Boundary’ a book often named as the greatest book written on cricket, must be remembered for his relentless campaigning which led to the ascendancy of Frank Worrell as captain of the West Indies.

Constantine and Headley fleetingly broke the tradition, and Worrell proved beyond any doubt that it was not only sons of the white ruling class who were capable or worthy of being leaders.

Frank Worrell became a symbol of adaptation, redemption, unity and integrity for Black West Indians and also a representative of an intellect that went far beyond the boundaries of the cricket fields. Worrell, was indeed a great leader and an even greater man by any measure.