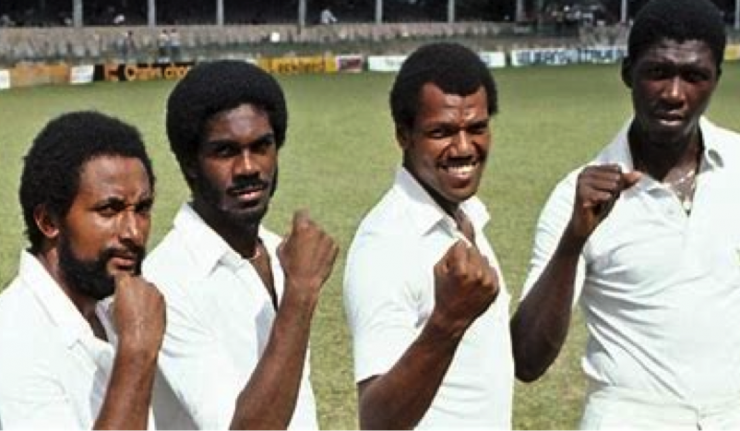 A Performance based Analysis

The famous and feared West Indies pace attack of Andy Roberts, Michael Holding, Joel Garner and Colin Croft played together in 11 Test matches winning 5, drawing 5 and losing 1.  The quartet accounted for 172 of the 181 wickets which were claimed by West Indian bowlers in the 11 matches spread across 5 series.

Michael Holding was the most successful of the four capturing 51 wickets, Joel Garner was next with 47 wickets and was closely followed by Colin Croft with 46 wickets.  Andy Roberts took 28 wickets while four other bowlers combined to take the remaining 9 wickets.

The distribution of overs clearly indicates that the workload for each bowler was methodically managed by captain Clive Lloyd.

Introduction to the Quartet

Andy Roberts was a shrewd bowler who used guile, genuine pace and an assortment of well-directed bouncers to unsettle the batsmen. He was the most experienced bowler and also the undisputed leader and mentor to the others.

Michael Holding was the youngest member of the group but he was the second most experienced as only Roberts played Test cricket before him.  He consistently generated express pace of well over 90 mph with his long, smooth, graceful and rhythmic glide to the wicket along with a near perfect action.  Holding is regarded as one of the greatest pace bowlers in the history of cricket.

Joel Garner bowled with unrelenting accuracy and extracted steepling bounce from any wicket.  He added value to the team with his excellent catching especially when fielding in the “gully” position. Garner is one of the most effective but underappreciated fast bowlers in the history of cricket.

Colin Croft was a physical menace to all batsmen. He was an awkward bowler to face because of the angle from which he delivered the ball and to further complicate matters for the batsmen, he was the most hostile and fiery bowler in the group. Croft was famous for bowling around the wicket and intimidating the batsmen by aiming short pitched deliveries into their rib cage.

Individually these four bowlers were special, but as a unit they were lethal because they complemented each other very well.

They played together in 5 series. Here is a brief review of each series.

The West Indies toured Australia for a 3 Test series during the 1979-80 cricket season and under the captaincy of Clive Lloyd they unleashed the four-pronged pace bowling attack on the hosts.  The unit of Anderson Roberts, Michael Holding, Colin Croft and Joel Garner were playing together for the first time in Test cricket and never before in the history of the game had four genuinely quick bowlers played on the same team.

Clive Lloyd missed the drawn first Test due to an injury and Derryck Murray led the team in his absence.

Lloyd returned for the final two matches and marshalled the team to completely overwhelm the Aussies and record the first ever series win (2-0) by a West Indies team on Australian soil.

Australia lost 56 of a possible 60 wickets in the series. Colin Croft took 16 wickets, Michael Holding and Joel Garner 14 each and Andy Roberts 11. The other wicket was taken by Collis King.

The next assignment was a visit to New Zealand. Here, the West Indies were subjected to a poorly officiated series.  They shockingly lost the series 0-1 primarily because of several questionable decisions which the umpires made in favor of the home team.

Champion batsman Vivian Richards missed the series and his absence left an irreplaceable void in the lineup. He was sorely missed.

Andy Roberts missed in the first match of the series at Dunedin which the team lost. This means the quartet only played 2 matches together.

It is interesting that considering Lloyd’s stated aversion to having a spinner in the team, Roberts was surprisingly replaced by off spinner Derek Parry.

Joel Garner maintained his high standards by taking 14 wickets and Colin Croft took 10 wickets.  Holding’s frustrations with the umpiring were evident as he only managed 7 wickets while Roberts had a meagre return of 3 wickets in his 2 matches.

Opening batsmen Desmond Haynes with 339 runs with 2 centuries and Gordon Greenidge with 274 runs were the leading scorers. Collis King who replaced Richards, had a decent series by scoring 187 runs with 1 century to finish 3rdon the run scoring chart.

Clive Lloyd then took the team to England for a 5 Test series and defeated the hosts 1-0 in the summer of 1980. Bad weather hampered the series and thwarted the likelihood of a West Indian victory in at least two matches.

Marshall filled in admirably with 15 wickets in four matches as the famous quartet only appeared together for the 2ndTest at Lords, London.

Viv Richards returned to the team and scored 379 runs with 1 century; Desmond Haynes also scored 1 century and was next with 307. Lloyd missed one match but was next on the list with 169 runs with a century to his name.

Michael Holding did not participate in any of the Test matches due to a lingering injury while Andy Roberts was rested for this tour of Pakistan which the West Indies won 1-0.

England toured the West Indies in 1981 to play 5 matches.  The second game which was scheduled to be played at Bourda, Guyana was cancelled. This was because of the presence of Robin Jackman in the English team. The Guyanese government revoked Jackman’s visa due to his cricket related ties with apartheid South Africa.

Clive Lloyd guided the team to a dominating 2-0 win in the 4 matches.  Colin Croft led the bowling with 24 wickets, Holding took 17, Garner 10 and Roberts 8 in 3 games.

The fabulous four played in 3 matches together as Marshall replaced Roberts in the 5thTest at Sabina Park, Jamaica and took 3 wickets.

The batting was led by skipper Clive Lloyd with 383 runs with 1 century and Richards who scored 2 centuries to go with 340 runs.

The West Indies returned to Australia for 3 Tests. The series was drawn 1-1.  Roberts missed the 2ndTest at Sydney as the quartet made their final appearances together in the 1stand 3rdTests of the series.

Holding was the leading bowler with 24 wickets, Garner was responsible for 12, while Croft took 7 and Roberts accounted for 6 in his 2 games. Sylvester Clarke replaced Roberts in the 2ndTest and took 1 wicket.

The leading batsmen were Larry Gomes who scored 2 centuries while compiling 393 runs and skipper Clive Lloyd with 275 runs.

The magnificence of the original “Fire in Babylon” fast bowling quartet of Andy Roberts, Michael Holding, Joel Garner and Colin Croft can never be denied.

They paved the way for the other fast bowlers and played a pivotal role in the unprecedented success which was achieved by the legendary West Indian teams led by Clive Lloyd and then Vivian Richards.

Let us salute these four legends of West Indies cricket.