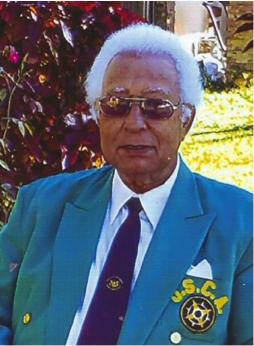 Born in Kingston, Jamaica, on November 8, 1940, Godfrey Everard Blair started playing the game of cricket at nine years old. He developed into becoming a good all-rounder and at age 14, while still in school, was invited to represent the parish of St. Ann in the Nethersole Cup competition, Jamaica’s parish version of Senior Cup. The schools, he attended before leaving Jamaica were Alpha and St. Aloysius Primaries, Ferncourt and Windsor High, and Durham College of Commerce.

The game became his passion and as an adult he later joined Lucas Cricket Club where he became a top leg spinner in the Senior Cup competition and got the opportunity to play in almost all the major cricket competitions in Jamaica. At Lucas he was involved in coaching the club’s ladies team which won two championships – 1963 and 1964 – and youngsters in the district of Rollington Town.

Coached at Melbourne Park by the great late George Headley, the then national coach in Jamaica at that time, Godfrey was invited to try out for possible selection in the Jamaican National X1 on several occasions.

In 1967, he migrated to New York, USA, and taking his love of the game with him, began playing for Wembley Athletic Club and Primrose Cricket Club, where he excelled as captain, League Representative and Public Relations Officer. He was also an honorable member of Villagers Cricket Club.

In 1973, Godfrey became a co-founder of the Caribbean Athletic Club in Chicago, Illinois. He served as captain of the team and Business Manager. Under his leadership, the team won the championship eight times.

In 1967, he represented the U.S. East Zone XI at Red Hook Park in Brooklyn, New York, against a visiting Commonwealth X1 team from England which included Test players Alan Moss and the late Sir Everton Weekes, of the West Indies. Godfrey also played for the same team against Bermuda in Staten Island in 1968. That same year, he was selected for the USA national team on a tour to England.

In 1974, he was selected to play for the USA against Canada and in 1979 played for the USA X1 against a Touring English X1 at Washington Park, Chicago. This was a two-day game.

Highlights of his career are scoring 189 not out in 1973 in St Louis, Missouri against Kutis Cricket Club in the Midwest competition, the taking of all 10 wickets in a game against a Sir Frank Worrell XI in the Illinois league in 1979 and that of a Hat-Trick three times.

In 2008, he started to play in the Masters’ League for the All-Pro Masters in Queens, New York. However, in 2011, he announced his retirement, but stayed with his club as manager until 2017, then relocated to Orlando, Florida.

“I enjoy cricket immensely. It was my passion, and I will always be a fan and supporter,” he said. “I represented the USA and Central South-East Zones to the best of my ability and tried to be a good ambassador of the game at all times.”